Within the hacker communities, a so-called hackathon (the contraction of hacking and marathon) is a well-known concept which consists of meeting up and getting some intensive programming done, typically during a day or so.

The hackaton or hackatonne (/hæk.ə.tʌn/) however is a less known concept (to be fair, a completely unknown concept at the time of writing). It consists of hacking an actual metric ton of devices.

While the hackathon is supposed to be a relatively short and intense event during which you are supposed to get something useful done, there are no such constraints on the hackaton. Reaching the full metric ton of hacks can take weeks, months or even years. Also, the definition of a hack is quite broad and diffuse, but can essentially be summarized to “any modification or use of an object that was not originally intended”, leaving a lot of freedom in the choice of activities. 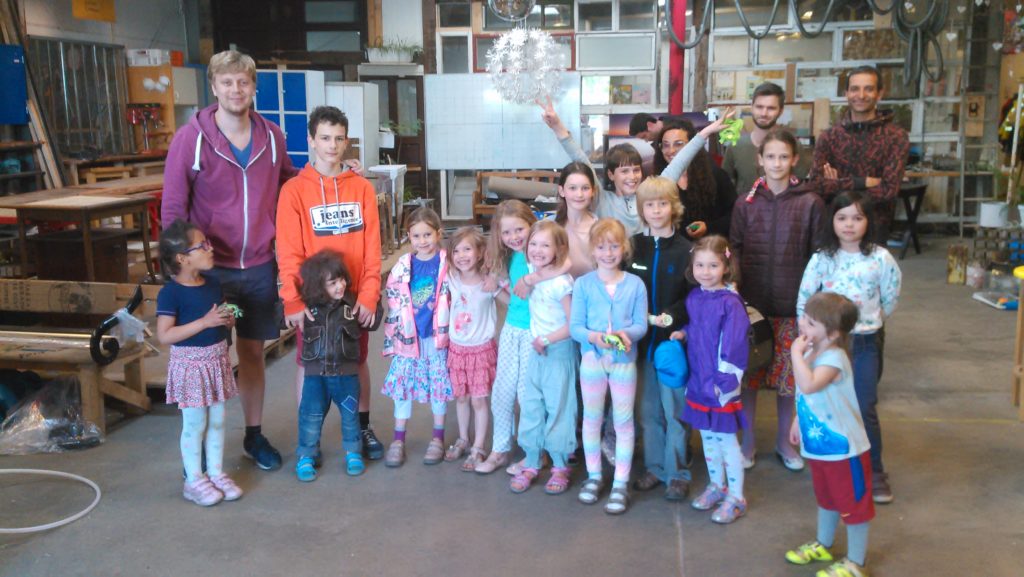 So for our first hackaton session on May 22nd, we went to Guldminen to disassemble toys. Guldminen is physically a hangar situated in a recycling station, a sort of laboratory in which the Guldminers collect discarded materials in order to develop new ways to reuse, upcycle, repair, redesign and redistribute them.

As a part of our STEM-for-girls experiment the location was perfect to train the children in disassembling devices, the objective being to strengthen the habit of investigating what lies behind the surface. Also, practicing simple motor skills such as screwing (clock-wise) and unscrewing (counter-clock-wise) is quite relevant for children of that age.

Guldminers Monica and Henrique took us for a walk around the recycling station and presented Guldminen’s facilities – a lot of machines including a lathe, a CNC milling machine / laser cutter a planer and more.

In preparation of the session, Guldminen had collected items for us during the week-end. These included a vinyl disk player, a large amount of plastic cars / cranes / tractors / bulldozers / trucks, an electrical trike, a cash register, kitchen toys, just to name some.

The hacking took place around two tables that Monica had prepared for us, with groups forming dynamically depending on which objects the children found interesting. We had brought additional screwdrivers and pliers, batteries, a couple of microcontrollers and a glue gun. Eight volunteers, mainly parents, assisted the groups when necessary. The session turned out to be well suited for a multi-aged group, as the smaller children (3y) followed along and entertained themselves with all the “new” toys. 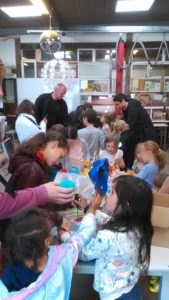 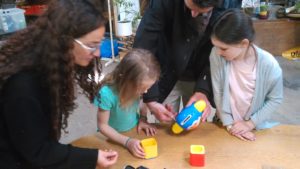 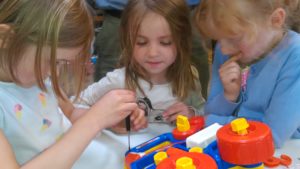 The purpose of the session was mainly disassembly, but on the reassembly side we did manage to activate a piezoelectric speaker from a walkie-talkie using the Arduino controller.

During the final evaluation, the children expressed that they had had a lot of fun and that we should definitely do similar sessions again.

Some of the learnings of the day are:

Some ideas for next steps: